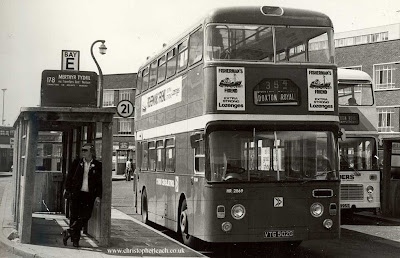 I have to say despite the rows of horizontal scratches caused when the film all those years ago was wound through my old Voitlander Camera I still quite like this picture. Probably because it was from hand loaded bulk-film didn't help either but somehow thanks to Sods-Law the tightness attacking the emulsion as it was wound through seemed to happen the most to the best images. But as far as posterity is concerned it is not a problem as I'm sure should someone have the motivation or incentive these scratches could be removed with little trouble in Photoshop. I guess you have probably guessed already, I work on the contrast and sharpness but apart from that I choose to serve them up as they are whether they have brown spots marks or the Loch Ness Monster on them. Few look at them as it is and I suppose at least it will put off those cheapskates who try to flog other people's material on Ebay.
As for the bus it came from the one-hundred-strong Rhonnda fleet whose base was at Porth near Pontypridd in the Welsh Valleys. The bus livery was pretty much the same as it's large BET Group neighbour Western Welsh but unlike WW who ran a high percentage of lowheight double-deckers Rhonnda had few height problems on it's major routes. After the NBC was formed in 1969 these two fleets were merged along with the BTC Tilling Red & White to form National Welsh. Rhonnda's vehicle policy had been for Leyland single-decks and coaches, particularly of course the Welsh favourite the Tiger Cub, but deckers came from AEC with the Regent. But as half-cabs went out of favour Rhonnda like WW turned to Leyland's Atlantean taking attractive buses like this 1969 Northern Counties bodied bus bound for the Royal Hospital at Cadoxton.
Posted by christopher at 07:52

Forgive me if I'm telling you the obvious, but if you are concerned about scratches, there is possibly an option in your scanner software that lets it automatically correct these with no hassle and without otherwise fiddling with the picture as you would have to do in photoshop. Most modern photo scanners can really work wonders in this respect. This is of course assuming you are scanning the negative or transparency rather than the print. The reason being that scratches on the negative are 3D deformations which the scanner can identify by the way the light reflects. On the print this type of information is lost.

Thanks for your comment Andrew, but I'm afraid I am scanning the prints. I can scan negatives too but that is a bit daunting.