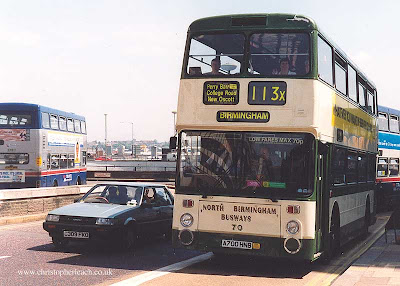 Birmingham is one city that couldn't be associated with the Leyland Atlantean as even though the Corporation tried a small batch of ten in the Sixties before placing orders for the Daimler Fleetline, and Standerwick Gay Hostesses passed through too, it was left to the sadly missed Independent North Birmingham Busways who operated about ten on routes out towards Sutton Coldfield to offer them a distinguished swan-song in their final days many years later. They snapped up well built and well maintained Northern Counties bodied examples from Greater Manchester plus other equally attractive examples with NBC-style Park Royal bodywork that started life with City of Plymouth. However these later AN68 buses of the Seventies and Early-Eighties were a far cry from the troublesome early PDR's of the Fifties and Sixties that people still moan about. Indeed many concerns that took well-tried AN68 Atlanteans preferred them to the new fangled Olympian which like the early Atlantean was also a flawed bus.
Posted by christopher at 08:11