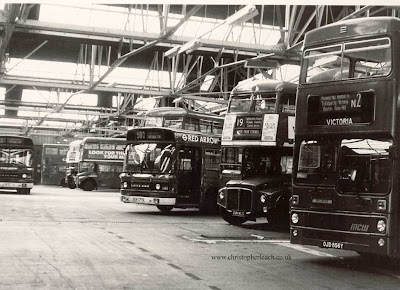 Gillingham Street (GM) in Victoria with 64 buses was the most central of all the London Transport garages. As you can see in the early Eighties there were still plenty of Routemasters to be found and as well as having recently taken a batch of MCW Metrobuses a major feature of it's operations were the 'standee' Red Arrows of which two of the then current generation of still quite new Leyland National2's were very much in evidence.
Posted by christopher at 07:44