Which is your favourite style of Saurer RH? 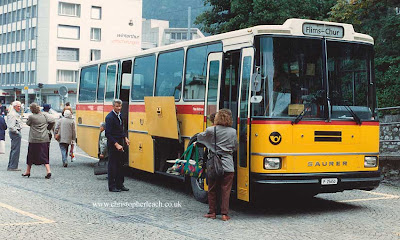 In the good old days of the Swiss PTT one could tell which of the yellow Post Buses actually belonged to them as opposed to their far more numerous contractors vehicles as they carried a P-letter suffix. With the Saurer RH fleet however it was usually very easy to tell from a distance as almost all the true Post Buses carried a totally different more rounded in-house style of bodywork to this. But as you can see the smaller P-reg fleet did make things more interesting as it also took some of these fairly square looking buses too which they numbered P25647-66. Even with these twenty non-standard buses it was still quite easy to tell them apart from the Canton Registrations because unlike their contractors version where there was a black lower front panel where it says Saurer, PTT buses like P25650 seen here in the early Nineties at Chur loading for Flims had all-yellow fronts right down to the bumper. I'm sure opinions are divided on which body style was the most attractive but I'm pretty sure that the true PTT version wins hands down as it looked crisp and well designed from all angles unlike these rather more square and ungainly buses including some with very boxy rear ends: Besides even though these were still quite nice and so very Swiss the main fleet of RH's was a true classic which will be missed for years to come.
Posted by christopher at 02:36