Blackpool: Towering over them all 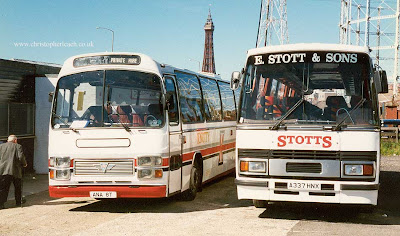 Blackpool has always been a great places for seeing coaches and when it's warm and sunny with trams and the many other seaside attractions too it's a great day out. Parked up one Sunday probably in 1996 were two coaches that had travelled in opposite directions. A337 HNX was a Plaxton Paramount bodied Ford that started life with the West Midlands Police and had found it's way to the well know Stott of Oldham. Whilst travelling the other way as far as Stoke on Trent in North Staffordshire from Manchester was 1978 ANA 8T another Plaxton coach but this time with Supreme bodywork owned by Knotty an enthusiastic operator the AEC marque including this 6U3ZR Reliance that was new to Greater Manchester Transport who bought Nos.5-9 for their recently acquired Godfrey Abbott subsidiary. Maybe they had been ordered prior to the takeover as GMT was well wedded to the Leyland Leopard by this time.
Posted by christopher at 05:04