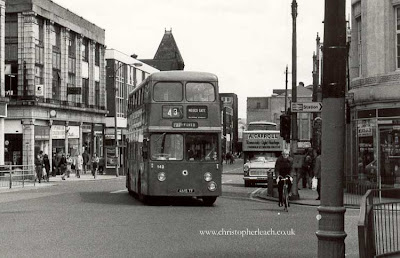 Like many operators Lancashire United did not convert to rear-engined double-deckers straight away in the early Sixties just buying a few alongside it's tried and trusted no-nonsense Guy Arabs. The modern Daimler Fleetline buses carried similar styled Northern Counties bodywork and although they looked a bit heavy from the rear I feel this was one of the most pleasingly proportioned early designs for these buses. In 1962 and the following year LUT took six of these buses 97-102 and 137-142.
Posted by christopher at 03:51