I wonder how Flight's got this idea: Flightlink 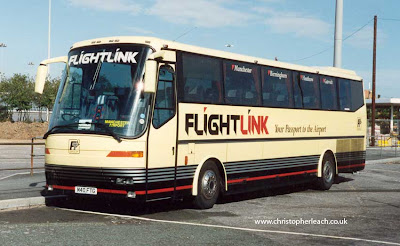 The well know long established Birmingham operator from Handsworth had some considerable success when most other newcomers failed after express coach service market was deregulated. It concentrated on services between the Midlands and other airports using rather up-market coaches like this Bova Futura seen on what is now Terminal One Car Park at Manchester Airport where it advertised it's route Manchester-Birmingham-London-Gatwick on the sides. After Flight's Airport Links like the 777 to Stanstead were sold on to National Express they retained Flight's distinctive livery and branding for a time too but now sadly it has gone. However Flight's name still lives on as it is now part of the Hallmark group that includes a number of quality coach operators including Dunn Line whose in-house livery bears a lot of similarities to this with the main difference being that a silver-grey has replaced the attractive cream colour.
Posted by christopher at 08:47