A Ribble to dribble over: Potteries Running Day 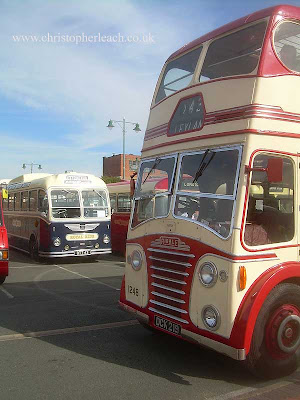 Along with Southdown on the South Coast, Ribble in the North West was probably everyone's favourite large BET Company. I'm not too crazy about bus rallies as they lack an element of reality, but not only does each one produce something interesting to see, at their best we are offered a wealth of nostalgic bus rides too. One I will remember for some time was on this former Ribble East-Lancs bodied Leyland PD1 Titan 'White Lady' coach which almost effortlessly and in comfort took us out over the hills to Cheadle and back from the Gladstone Pottery Museum in Longton. Here we can see a profile of it's Art-Deco inspired styling whilst in the background is an example from the best know of the former Tilling Group coach operators 'Royal Blue' whose ECW bodied Bristol LS vehicles like No.2200 of 1957 ran down the A30 and other main roads between London and the West Country.
Posted by christopher at 11:18

Thanks for this absolutely stunning shot