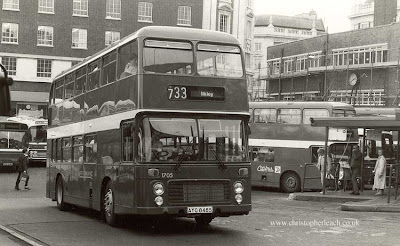 One thing I liked about the so-called Tilling Companies like West Yorkshire is that they built for themselves attractive well-appointed bus stations in brick like the busy one here in Leeds, one of three in close proximity in the city. This picture was taken as the National Bus Company was being broken up and operators started to go for what they considered eye-catching schemes, or as here at West Yorkshire where they returned to their pleasantly conservative pre-NBC red and cream livery. Consequently Bristol VR No.1705 heading off to Ilkley looked rather smart in an attractive bright and proper red and cream newly liberated from that dreary poppy-red and white but albeit still looked a little strange and surreal.
Posted by christopher at 05:24