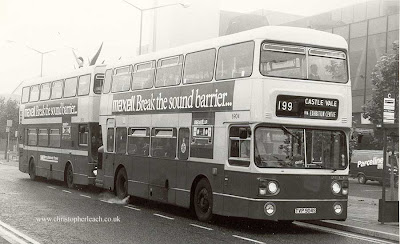 This was taken one morning when I had a long wait at Birmingham Airport as my Father's incoming plane was delayed by thick fog. It might have been early in 1987 but West Midland Travel fans will know as it was the time when the local blue buses were losing their PTA ownership WMPTE identity for a Privitised West Midlands Travel following it's sale to National Express. The Metrobus at the rear has recieved it's new name whilst MCW bodied Leyland Fleetline No.6904 churning out a healthy plume of grey exhaust looks a little bare and dare I say it, cold.
Posted by christopher at 03:54