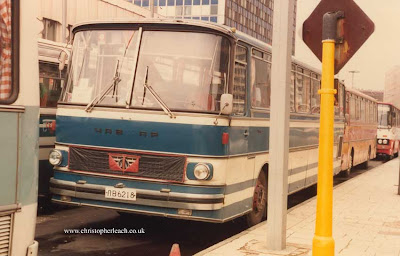 In the former East Berlin one would have expected to see a far greater variety of buses and coaches from across the Iron Curtain than there was. But with coaches at least they seemed to be mostly the same Ikarus from Hungary or Autosan models from nearby Poland. However there were strange beasts and unfamiliar number-plates like this one that behind the strange name and radiator grill blanket seemed to lurk the vague shape of an elderly Setra probably built under licence.
Posted by christopher at 11:38