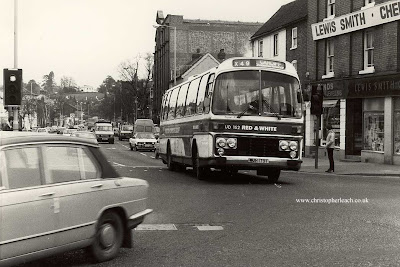 Traditionally one could always see Red and White buses in Hereford where they met the all-red or red and black Midland Red, the greens and creams of Yeoman's and the brown and red of Wye Valley with it's elegant half-cab coaches and Bedford OB's and small old-fashioned village-petrol-pump-style garage right behind the bus station. Red and White came in from places like Tredegar and Monmouth and even due-west marking it's boundary from that of the huge Birmingham giant with it's BMMO buses to Hay-on-Wye where they met a maroon Western Welsh Tiger Cub bound for Brecon. Even the giant 'Tiling-Green' Bristol Omnibus just about reached here too from Gloucester. In the Eighties Red and White were still coming here but instead of a sturdy pre-Nationalisation ornate double-deck Duple bodied Guy Arab or newer BTC smartly turned out FS Lowdekka one was more likely to see something more like this rather well used looking Plaxton bodied Leyland Leopard on the long x49 Service to Cardiff. However certain things remained from the olden days to remind us of more interesting times and a good example was how this operator not too long ago devolved again from being a part of National Welsh prior to denationalisation still managed to retain the numbering system that went back many years, U-standing for underfloor-engined-single-decker and D for dual-purpose semi-coach. Of course Red and White became a part of the huge Stagecoach and Hereford close to the welsh border still marks it's boundary, but go east and their empire goes almost uninterrupted all the way across to the other side of Cambridge in the heart of East Anglia. Interesting, I will have to do more little features on those interesting border towns where different operator's met.
Posted by christopher at 02:08