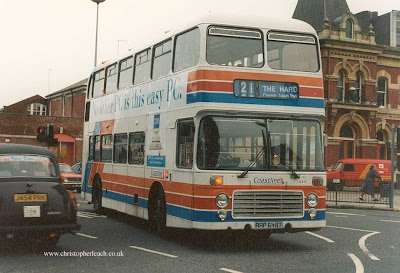 As it says on the front of this bus caught in Portsmouth just as it was going dark, those Stagecoach Stripes were a bit hard too on the eyes when they were applied on buses where they did not belong. Southdown who used to run this South Coast fleet was renowned for it's subtle apple-green plus cream and gold lettering whereas Stagecoach went for a less restrained already dated American approach. Looking back those stripes didn't look so bad especially on more angular Alexander products which in more than one way Brian Souter was to make his own, but this poor ECW bodied former United Counties Bristol VR looks slightly embarrassed like some glamorous former movie star caught off-guard on the doorstep by the milkman in her rollers and dressing-gown.
Posted by christopher at 23:30