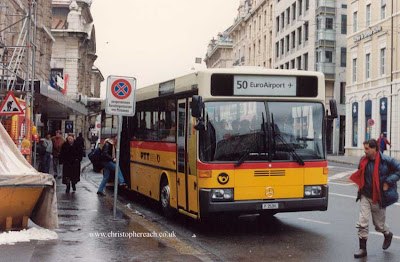 For a large organisation like the PTT it would not have made commercial sense just running one route in Basle and having maintain a garage for sometimes as few as five buses. But before the Swiss postal and telecoms were spilt up and the latter privatised, the often unprofitable post bus service was not regarded as an issue and where there were not enough vehicles to justify a base a small row of garage units could easily be accommodated within a telecoms compound. This became a problem for the split-off Die Post bus operation as they had to move out of the now Swiss Telecom site at St Gallen with nowhere else suitable nearby to go. Basel was about the only PTT Garage I never visited but I knew what it was like as the train southwards to Laufen went right past it and occasionally there was a glimpse of a bus parked down below as the elevated railway track high passed above. On my first visits to Basle at the start of the Nineties the fleet was all those lovely Saurer RH's but these were gradually all replaced with more suitable but comparatively dull Mercedes O405's for this urban run out to the Airport. Nevertheless despite that and the awful weather this was not such a bad quick exit and back from the station as the driver of this bus kindly gave me a couple of bus-motif lapel badges including my favourite the Haifisch FBW C40U.
Posted by christopher at 02:07