West Midlands One Livery for All 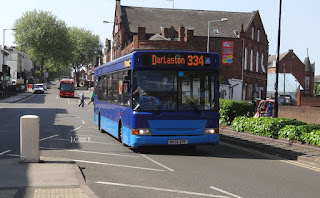 Change seems to be afoot in the West Midlands as the Metro has decided to standardise bus liveries of the various operators in the area. Personally I think these sort of political gestures are just that and a waste of time and money when done on their own without other improvements. It's a bit like calling the River Severn something else so that it will no long flood.  They say it prevents confusion but I argue that it is the other way around as many people now know which is their bus simply by the livery without looking to see where it's going. Naturally they will be wearing National Express West Midlands current two tone red colour but had it been a truly democratic decision they might have picked something else, but I only say this as the idea of West Midlands having to paint  all it's hundreds of buses in the thirteen Banga Bus blue and yellow made me smile imagining their shocked faces. I can't say I will miss the colours of Thandi though like this Dennis Dart seen in Walsall. I wonder if this will affect Arriva too and other operators who nip into the area like Select.
Posted by christopher at 15:03

All buses in Birmingham and the Black Country to be red?
You know what this means, don't you?

Ross I very much like the strong red livery what I term 'proper bus colours' but I think West Midlands buses should follow tradition and be blue.

Whilst I agree with you, red not looking quite "right" for the West Midlands, I'm going to be irritatingly pedantic and suggest that shouldn't it be red for the Black Country, green for Wolverhampton, mid-blue for Walsall, blue and cream for Brum and however you describe West Brom's nice but ornate livery for Sandwell?

[The smiley is for the benefit of anyone offended by my apparent criticism of BCT's hegemony. I'm a Brummie, so I'm allowed to be rude about BCT!]

Ross I would bring it all back if I could and the buses of course. I did enjoy it when WM revived all the corporation liveries on a few Metrobuses etc as a celebration of it's heritage.