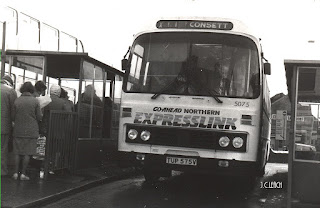 Deregulation was something of a lottery with few winners and hundreds of losers. In this gold rush there was a lot of bullying and unpleasantness, and both long established operators and newcomers either fell on their swords or if they were efficient able to grab the money and run. Indeed parts of the NBC were sold off so cheaply by selling a bit of properly newcomers like Stagecoach had enough to buy the next and the next.  Who would have guessed at the time when I took this photo of a rather unpopular Willowbrook 003 coach bodied Leyland Leopard on a limited-stop service to Consett that it's NBC management buyout team who had formed Go-Ahead would become one of the main players to prosper and survive to the end of the game of public transport monopoly.
Posted by christopher at 15:36

Goodness that looks like the remodelled Marlborough Crescent bus station in Newcastle. They ripped the old full width roof down and put tiny bus shelters on each stop lane. Now gone and completely build over with nothing to indicate buses ever stopped there.

No it's not always a good idea to go back either.