Brighton: A bit of a dog! 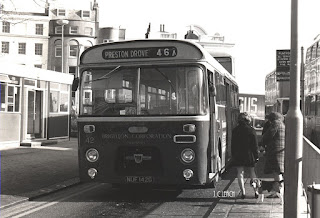 By the end of the Sixties bus operators were finding life tougher. New single-deckers built for 'OPO' like this Brighton Corporation Marshall bodied Leyland Panther introduced to help cut costs from falling passenger numbers only saddled them with expensive mechanical problems and more debt. These early rear-engined saloons were even more troublesome than the less than perfect Atlantean and Fleetlines but at least when those appeared on the scene firms could revert back to trusty old-fashioned half-cabs for a few more years but by 1968 there were fewer options and firms had to make do with new underdeveloped  technology. Even the basset hound looks unimpressed.
Posted by christopher at 02:47

It's a more interesting vehicle than just a plain Panther. The cheeky little cat on the grille badge is the under-engined Panther Cub, which must have been really fun on Brighton's hills.
Sources elsewhere say this was the last Panther Cub delivered in the UK.
Thanks as ever for some great photography.

Thanks Shieldsman, no I didn't realise this was a Panther Cub. No doubt it was not very popular with crews and being under-powered would have made it thirsty but I imagine the Manchester ones were more suited for the congested 'Inner Circle'. I am glad one from Warrington remains and I was lucky enough to have a ride on it down in Bristol.

Brighton Corporation operated the UK's first OMO double decker with Weymann forward entrance Leyland Titan PD2/37 fleet number 23 on routes 26A/46A on 15 June 1966. It went on to convert 35 Titans to PAYE by 1971, making it one of the country's more successful adaptors of front-engine double deckers to OMO.

Thank you Philip, obviously they preferred them to more Panthers or dare I say it Panther Cubs, but I'm sure 'opo' on half-cabs must have been a strain and was not popular with crews. However one or two remained into the 90's as open-toppers and I took a ride on e.

Brighton General Manager Eric Kay's real cleverness was in getting the trade union's agreement to operate the OMO Titans in all-day service. East Kent (no less than 47 AEC Regent Vs) and Southdown (10 Leyland Titan PD3/4s) did OMO conversions but union resistance meant they were largely restricted to schools, works and relief duties as OMO.

They came up with some daft solutions to pacify the unions as well such as closing off the upper deck on deckers working on 'OPO' duties. I don't think it lasted long, it might have applied to the London XF's at East Grinstead if my memory serves me correctly.

london Transport trialled double-deck OMO with XFs on route 424 between 2 October 1966 and 31 March 1967. They ran OMO off-peak with the upper deck closed off and carried a conductor at peak hours when both decks were open. London Country (as successor to LT's Country Area) reintroduced double-deck OMO to the 424 from 27 June 1970 using XA and XF types with both decks open at all times.