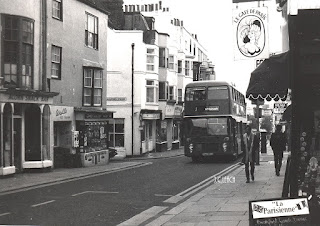 I suppose after Blackpool the town of Brighton must be Britain's best known holiday resort but there are many and the nice thing is they are all different. Brighton and Hove with it's royal connections aspires to be a little bit posh but fails but being the favourite resort for Londoners makes up for it by being a little bit cosmopolitan and certainly bohemian in the 'Swinging London' King's Road sort of way. Blackpool had Ribble buses and Brighton Southdown both interesting fleets which were associated very much with Leylands in BET days but as elsewhere within the later NBC years had to buy Bristol VR's. But even under the NBC both were able to take some Atlanteans and whereas Southdown got rid of theirs quite quickly for more Bristols Ribble managed to just buy a few and stick to the now reliable and better AN68.  TNJ 994S might look like it has a fairly standard ECW body  but it was in fact a convertible to open-top. I suppose by this time even open-toppers had to be modern enough to do all year round 'OPO' but I think we all preferred the resorts when the most ancient buses like old-donkeys were given an easy retirement gently cruising along the promenade. Oh well it was not all bad for here at least on the South Coast they managed to keep one or two.
Posted by christopher at 16:52