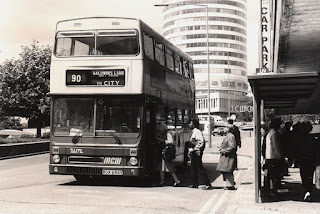 Birmingham was bathed in bright sunshine when I took this shot of a West Midlands Metrobus with the Rotunda in the background, a more durable landmark in this city which is constantly changing. We are now more aware of Victorian buildings that deserve to be saved but the Rotunda so symbolishes the concrete underpass Birmingham of the Sixties and early-Seventies it should be preserved as an important landmark of it's time, the other one that springs to mind as being of national importance is the magnificently bold and brutal Preston Bus Station.
Posted by christopher at 17:22