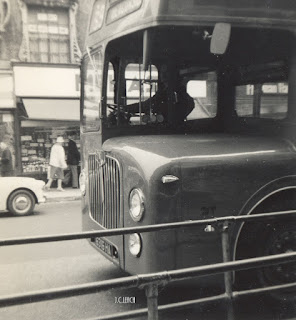 Even as a schoolboy I managed to take some decent photos despite having a pretty primitive camera. For a young spotter a brand new  Midland Red D9 was something to behold with all it's bright red paint and untarnished metalwork including a bit extra on  this still shiny bus as it had beading around the wheel arches as can be seen here. I checked out 5315 at Markfield and it still had fibre-glass wings and so I think 5316 at Stafford was the first one maybe. 5317 also at Stafford was the same but a few numerically later ones retained the earlier wings and the inconsistency was perhaps typical of Midland Red and although it was far from true it could almost be argued that no two BMMO's were the same.
Posted by christopher at 16:39