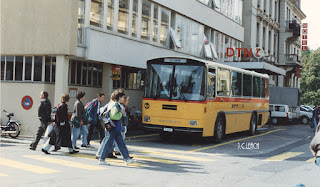 In many Swiss towns whatever the weather and indeed even when there is an inch of snow lol just like clockwork yellow post buses are there patiently waiting outside the station for the busy express trains to arrive. Even though it is quite a decent size Neuchatel was only served by the one route seen here to La Locle using one of the now much missed Saurer RH buses. As a government body the PTT had special status with certain privileges for vehicles carrying the 'post horn'  like having the right of way on Swiss Passes. Also it was a cosy relationship with railways for if there was room they used to have their stands  right next to the railway platforms, but rather like Britain and Brexit once the post office was devolved not only did they lose their very own P-Reg numbers for cantonal plates the post bus became a more humble affair having and the stands were moved further away as was already the case here.
Posted by christopher at 03:26