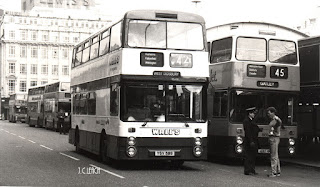 Someone's got rather overheated about something and a patient looking bus inspector obviously tries to humour the angry man. Now split into North and South divisions in readiness to be sold off probably all these Greater Manchester buses are Leyland Atlanteans, but another former GMT bus also carrying 'Manchester Standard' Northern Counties bodywork and hiding it's age was a Daimler Fleetline. Hall's green and white colour scheme was very different from the brown and orange buses of it's former owner at Piccadilly Bus Station.
Posted by christopher at 17:27