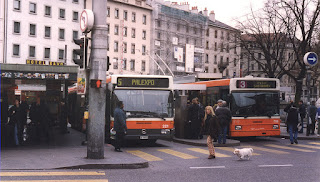 When I used to take my short winter break in Switzerland there was often a bit of time to kill in Geneva and despite being saddled with a bit of luggage there was always a bit going on outside the station to photograph. By this time in the late Nineties all the Sauer-Leylands had gone aprobably the last of the FBW and Saurer buses too. Mercedes bought out the Swiss bus chassis builders which is why they became commonplace ie this 0405, and even though the trolleybus might have a Hess body the rest of it might have been a NAW used for local spec Mercedes buses built at the old Saurer factory at Arbon.
Posted by christopher at 02:02

The trolley is indeed an NAW, built in 1992 and apparently still in service.
Picture of it in current livery here http://www.tpg.ch/fr/trolleybus-naw-siemens

Thanks, it nice to make a right guess for a change.