From Poland a French looking Jelcz in Prague 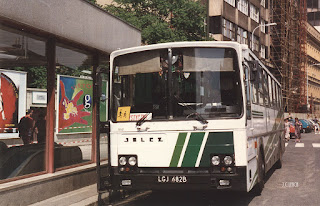 Apart from having what looks a bit like a 1964 London registration number this bus in Prague had a British connection. It was built by a polish firm Jelcz which had been known as Zubr until 1968 and built buses using licence-built Wola-Leyland engines. At the end of the 1970's an agreement was made with Berliet where Skoda based passenger models would be replaced with the PR100 city bus  hence it's rather brutal french appearance. However it was powered by Berliet or the Wola-Leyland.
Posted by christopher at 01:00