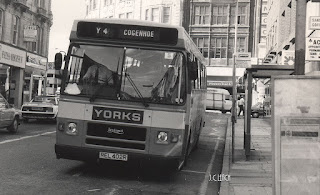 Following Deregulation well known for it's quality coach fleet it might seem odd to see a York Brothers service bus. But in the past it did indeed run buses even double-deckers including an all-Leyland PD2. But Leylands were a rarity, which makes this rebodied Leopard even more interesting. It's new Plaxton Bustler was not common either on a PSV either nore usually found on white painted MOD vehicles and the like. It had started life with Shamrock and Rambler as a futuristic looking but not very sound Willowbrook Spacecar body. York had been an AEC advocate in the past and by 1986 just one remained in this Northampton based fleet, the rest being  Ford, Setra and Volvo.
Posted by christopher at 02:11