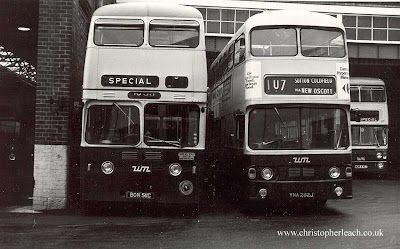 Three contrasting Daimler Fleetlines stand outside the West Midlands PTA former Birmingham Corporation bus garage at Miller Street just off the Walsall Road in 1980. No. 3511 of 1965 was typical of it's period and unless one could actually see the more rounded side-profile they might have mistaken this Park Royal body for MCW. As for the more attractive PTA standard bodied bus of the Seventies on the right it was very hard to tell those two same bodybuilders apart this time but 1979 No. 6975 was an MCW. I expect though a real expert could spot tiny detail differences. Looking somewhat out of place was former Midland Red 6282 one of a batch of dual-entrance Alexander bodied buses of 1971 that nearly all were transferred to the PTA with this example coming from Sutton Coldfield Garage which closed when West Midlands PTA looked to make economies.
Posted by christopher at 01:45