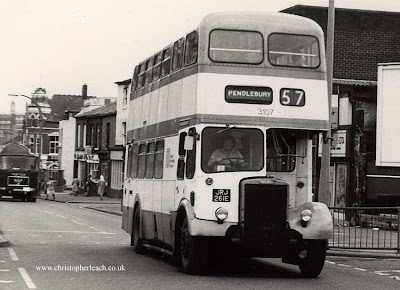 After several years pause it was the thought of not recording the death-throws of these fine half-cab buses that persuaded me to get out my camera again. It was just in time too because former Salford MCW bodied PD2's and Lancashire United Guy Arabs would not be running out to places like Leigh and Pendlebury for much longer in 1979. As was often the case undertakings like Salford were wary of the new fangled Atlantean and Fleetline and continued to buy the reliable buses they could rely on as well.
Posted by christopher at 01:46