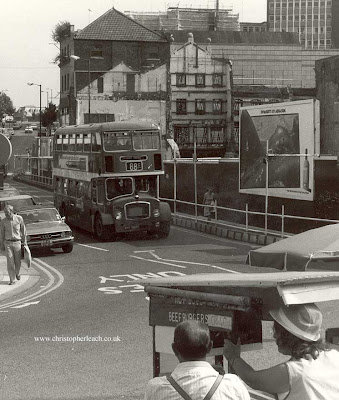 Unlike the BET Companies which had been taking the Atlantean since 1959 and the Fleetline since 1963 It wasn't until about 1968 that the nationalised Tilling Group companies started to seriously take deliveries of Bristol's rear engined double-decker the VR. Consequently as half-cab double-deckers became scarce it was often the old Bristol Lowdekkas that still seemed to be the most numerous. Still a hot-spot in the early Eighties was Bristol where they were still quite commonplace working throughout the day like 1964 FLF No.7166 AHY 782B seen in the city centre.
Posted by christopher at 01:56