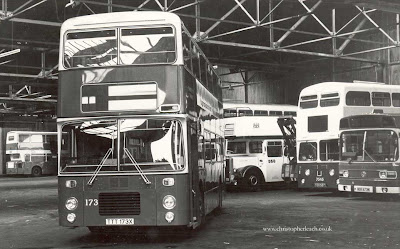 Sadly yet another former British Municipal operator has sold out to the big groups. Thankfully the lucky bidder is not one of the big three and the Go-Ahead Group retains local identities so it could have been a lot worse. It will be interesting to see what changes occur and whether the double-decker will make a come-back here. At one time Plymouth ran no single-deckers till the Leyland National came along, and following generations of half-cab PD2's came the Atlantean. However three Olympians were tried but they didn't find favour here and all including No.173 seen here at Milehouse were initially sold to Stevenson's of Uttoxeter before finding their way down south again when they were bought by Wilts and Dorset.
Posted by christopher at 08:27