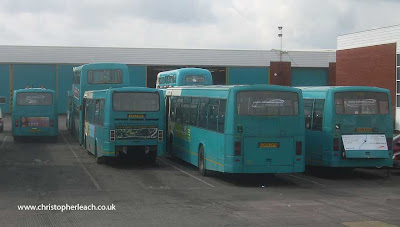 During the Easter Holidays I had to go through Cannock so I decided to take a quick peep to see what was in the yard at the local Arriva Depot. The K-Reg Dennis Falcons bought new in 1992 are still in service in Shropshire but 1989 examples that came from London and Country and North Western were parked up and presumably withdrawn. Also in this view is with a similar East Lancs body a former Grey Green Volvo and a little Dart new to Midland Red North that was waiting for a new engine. Oh and I almost forget there's a former London Routemaster RML that the company keeps for publicity purposes.
Posted by christopher at 16:00