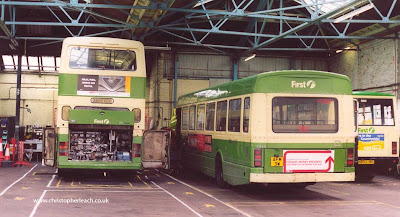 In 1966 way back in my schooldays one Sunday afternoon I cycled the twenty miles or more to Bridgewater to spot the Southern National allocation of 29 buses at the garage in East Quay. As you might expect the buses had changed a great deal since those days when I visited it again to se the buses about five years ago. Of course once up on a time the fleet was all solid dark green Bristol/ECW products and even though there were still a few Bristol VR's and more ECW bodies on the odd Olympian like No.1813 seen here, Mercedes minibuses were very much in evidence too. Secondhand buses and school transport played a big part here too after Privitisation and the fleet included second-hand Leyland National2 buses like this one that had been new to Crosville. But the biggest change for me was that once to reach the garage meant a ride down one of a network of very narrow bumpy streets of terraced houses but all that had all gone as new roads had cut through this part of town coupled with car based retail development. Shortly I was told by one of the mechanics that this small garage with it's larger yard down the side would go too as the site had been sold to Tesco for a supermarket: And that is a surprise!
Posted by christopher at 08:01