It's Accrington Stanley not Hyndburn 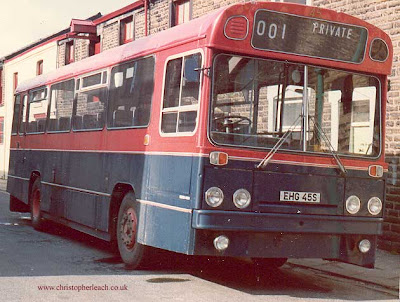 Yes many will remember the strange dark blue and red buses of Hydnburn, formerly known by it more sensible proper name Accrington till 1974. In those days the fleet was mostly Guy and Leyland but by the time it had it's new name it very much a Leyland fleet with a few Bristols too. This 1978 Leopard was a no nonsense service bus as was it's locally built East-Lancs body fitted with a flat screen and stout bumper. The company got it's unusual livery from the colours of a local army regiment who appropriately enough were called something like The Accrington Boys and who like many others got senselessly massacred in the mad carnage of the Great War of 1914-1918. The company struggled to keep up after Deregulation and by the time it was taken over by Stagecoach this once smart Lancashire operator looked a bit sorry.
Posted by christopher at 03:36