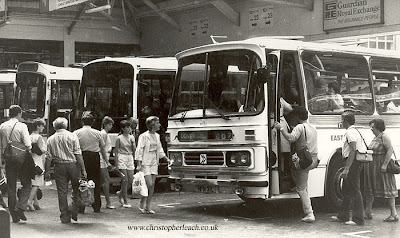 As can be witnessed from the girls looking nice in their shorts Britain was obviously enjoying another warm spell when I shot this busy view in London's Victoria Coach Station. Although the National Bus Company wanted to standardise, for the first few years at least the various operator's such as East Kent who had been staunch AEC fans were allowed to take delivery of the Reliance as opposed to the Leyland Leopard that was now the more usual choice like this Duple Dominant bodied example that to the casual observer might have been either. Traditionally even though East Kent operated over six-hundred vehicles they never carried fleet numbers as the registration-number sufficed, but by the time this view was taken in the early Eighties it's administration had been merged with it's next door neighbour Maidstone and District and consequently carried their numbered series No. 8031. This was no bad thing because by this time buses were being moved regularly between many companies and confusion would have been inevitable. Despite these strong links between M & D and East Kent both companies remained separate and unlike the white NBC coaches which both had in common it was still just as easy to tell them apart as the Maidstone operator wore NBC green whilst the Canterbury concern bore NBC red.
Posted by christopher at 15:47