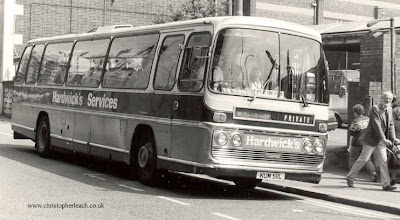 Wallace Arnold is best remembered for it's coach services especially the extended tours taking it's vehicles as far as Moscow but it did a lot more including running a few buses too under the Kippax and District, Farsley and Hardwick's name including double-deckers purchased new. In 1973 half a dozen Plaxton bodied Leyland Leopards arrived to bus grant specification but when new served as coaches on the tours programme. However by the end of the Eighties KUM 511L had no doubt put in a good few years on the more mundane duties it was originally intended for. Strangely enough it was seen far from it's Scarborough base picking up in Leeds still showing it's 'pay-on-entry' sign on what must have been a private-hire.
Posted by christopher at 08:19