A Bad Dream: Those Bread Vans, I mean Minibus Britain 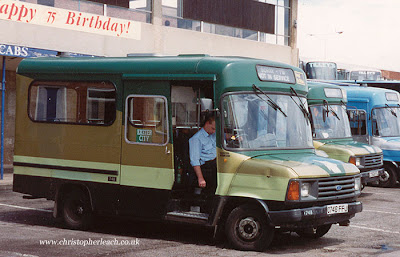 As a bus enthusiast one of the low points for me was the invasion of the minibus on high frequency services and quiet city centres like Exeter started to resemble New Delhi as they jostled for position in the high street. Harry Blundred a former Devon General driver who was the MD of Transit Holdings was something of an eccentric and he believed minibuses, or rather bigger minibuses were the solution to all transport problems including long distance express services like the busy one they operated between Oxford and London. Fortunately his day had passed before he completely achieved his goal. As for this photo it was hilarious, moments later the snoozing driver woke up and fell right out of the bus to his great embarrassment
Posted by christopher at 04:23