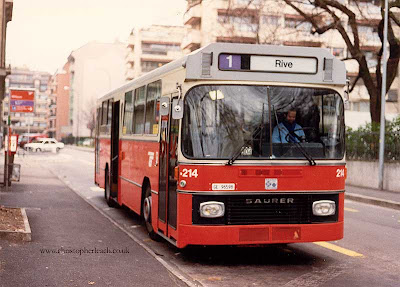 During the Seventies several small bus manufactures and bodybuilders got together to help each other sell their products in local markets and to be able to offer a wider range of sophisticated products and called it United Bus. Sadly they still could not withstand the clout of the big boys like Daimler Benz and Volvo, and most of it's members have since ceased trading or absorbed. But it did create some interesting buses like Geneva 214 which was something of a European Hybrid as although it was obviously a Danish DAB using Leyland compenents from the U.K it was badged as a Swiss Saurer because of it's engine and Swiss customer.
Posted by christopher at 14:29