Take me back to Gotham City Batman 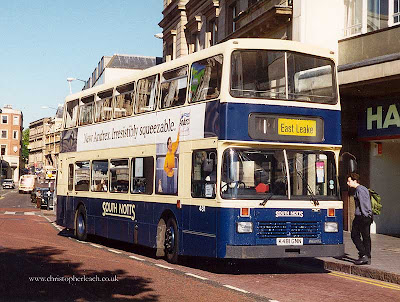 South Notts ran about thirty buses from Gotham, pronounced Goatham on the busy corridor between Loughborough and Nottingham where it also served some large housing estates like Clifton. All the double-deckers were low-height including this late East-Lancs bodied Leyland Olympian which was one of the last new buses before it was absorbed into the Nottingham City Fleet which partly owned it along with Barton. The old dark red and blue livery was certainly distinctive but the later cream version was much more kind on the eye and attractive..
Posted by christopher at 00:34