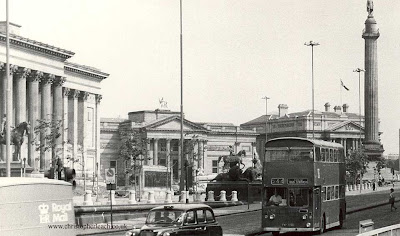 Liverpool Corporation Buses always had something of a utility feel about them and it was only when with a flash of Sixties Inspiration that they came up with not just a welcoming looking Atlantean but something of a superb design classic. Maybe Classic is too strong a word but what their modifications did for the rather plain uninspired MCW body was quite an achievement. Numbers started at L500 in 1963 and had reached L772 and beyond by 1966. Almost three-hundred similar buses were built before Alexander bodies became the norm, but whereas the squared-off Liverpool Look improved the MCW buses considerably, somehow the Liverpool peaked tops and brightwork around the skirt had the opposite effect on the already rather well proportioned round and elegant Scottish product.
Posted by christopher at 02:44