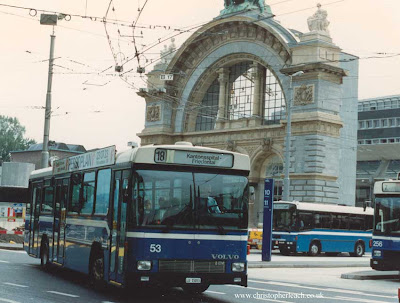 As one would expect a country that is proud of it's railways should have honoured them with some fine architecture and the small city of Luzern was no exception. Sadly the old stone railway station was destroyed by fire and replaced by a modern glassed square one with lots of basement shopping facilities but at least the imposing entrance which survived the blaze was retained as a monument. As well as it's own motor and trolleybuses Luzern also uses contractors vehicles too in it's own livery including the R & J bodied NAW in the background. Volvo buses were favoured by the undertaking like this B10M No.53 seen in the early Nineties. A lot of these LU 15000 series registrations seem to be carried by various buses.
Posted by christopher at 07:36