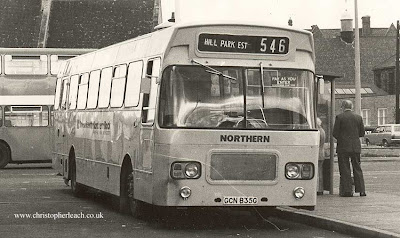 The Sixties was a period of experimentation and innovation in the Bus Industry. Marshall built this rather striking single-deck body called the Camair which apart from a few odd ones and a small order for Stratford Blue that in the end went to Preston it was only really supplied to the Northern General Group. Most were built on the Leyland Panther chassis and Northern 2835 was seen at one of their regular haunts Jarrow Bus Station. Sadly the formation of the National Bus Company and the implementation of the Leyland National killed off this bus that might have had a promising future.
Posted by christopher at 08:54