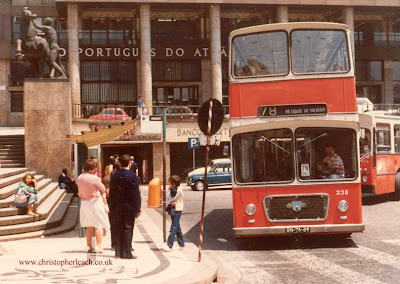 Had I been a good little tourist and stayed with my tour party instead of running off every time we stopped photographing fine buses like this attractive Sixties built Salvador Caetano bodied Leyland Atlantean I could have told you all about this well known central location with it's modern architecture and large sculptures. Behind the double-decker is at that time in 1984 a recently rebodied Leyland Leopard which shares the same angular body shape as it's big sister. This interesting view in Porto, Portugal's second city was probably prompted by my wanting to get the girl sitting on the steps in too.
Posted by christopher at 06:27