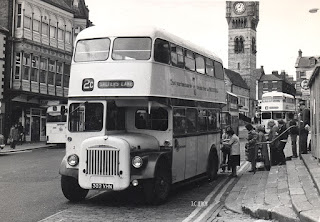 By the time I took this rather grand view of No.2 302 VHN all the other Darlington half-cab types had gone but these fine teak-framed Roe bodied Daimler CCG5 buses were worth the detour off the A1. The pavement steps no doubt built up in a stepped way was to keep the rain water and horse droppings off the skirts and footwear off the better heeled pedestrians but it helped me with my composition and in a way it reminded me of Chester. it was a memorable day for when an hour later I returned to my van a traffic policeman was waiting for me and thought I was a piss-taker for I had been stuck in traffic whilst right behind his car and peering down a side-street I spied a parking area. Little known to me was that to get to it I had to make a 'no right turn'. As i was already passed it I did not register the road sign and I told the aggrieved copper this but he still didn't believe me. Then I said I was a professional driver why should I blatantly break the law and risk my licence and he just said "Balls!"  After several attempts he couldn't make me admit to doing it deliberately and reluctantly went on his way. I had Stafford written on the side of my van so I was a stranger, why do these people always pick on us I always try to be courteous, it's the same with macho motorists who think one is some kind of ignorant moron when one has to change lines because they are lost especially in places where they tell you to get in lane first before where it  actually goes.
Posted by christopher at 02:33