No way to treat a Lady! North Western A40 SMA in Liverpool 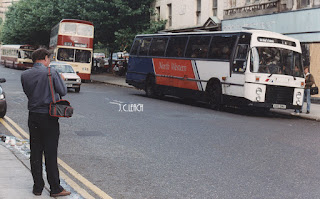 It seems one is never too old to collect bus numbers, well at least it keeps them off the streets lol. I'm not sure it would really appeal to me today the same way it did when I was a teenager, and it was a needs must hobby for we didn't have much spending money unlike the 'spoilt' children of today and so we  had to make our own fun with just enough pocket money to make the odd trip and buy our Ian Allan ABC's. Also of course we had to make huge efforts to get about as we didn't have anything apart from a bicycle or save up just enough to buy a rover or budget rail ticket. I always thought the Laser was rather sleek and sexy but thankfully the chap who modified this former Crosville Tiger for bus work never became a plastic surgeon as he might have been sued for incompetence.
Posted by christopher at 07:00