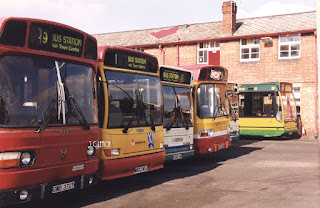 There was a time following Deregulation when buses kept coming along with for the public a brand new name which had little real meaning and a hurriedly applied different livery. Of course it didn't usually solve any problems as it was still probably late and manned by the same unfriendly or rude driver who now had an 'improved timetable' which made him even more late as he hadn't learnt it. Midland Red North seemed to struggle with image and direction but of this lot I think the most attractive was the National with the white band and the traditional 'Midland Red' was all it needed to show it's heritage and certainly a lot better than the one which was not only completely the wrong red the paint quality was so poor it lost it's sheen in no time at all. Other buses here include a smartly turned out Optare for the park and ride and the curse that is still with us today Arriva's aquamarine, a 'nothing' annoying colour just vile. First's Barbi might be a bit cold but at least it was cleverly designed and even those Stagecoach stripes looked good on most Alexander types which they made their own like the PS, the Dash and the R Type decker. Still I don't suppose most people worry about such things.
Posted by christopher at 01:42