This Site Is Available For Sponsorship 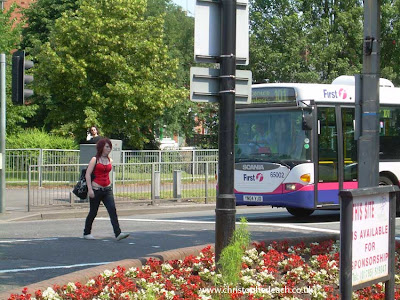 It's certainly worth a try as that's what it says on the sign above municipal flowerbeds here in Stafford. The First Group took over our next-door large bus operator PMT in the Nineties who at one time when I was a spotter had an impressive 520 buses but service cuts in NBC days eliminated most of the country routes and under First no-one would say they run an intensive network in the urban Potteries either and including minibuses the fleet size now must be about half what it used to be. Yes many years ago right up to the mid-Seventies the Potteries Motor Traction company had a small garage just a stones-throw-away from this now green spot at Gaol Square with for much of the 1960's five single-deckers to work the village routes north of the town and two Leyland Atlanteans to do the operator's share of the Parkside-Baswich town service with Midland Red whilst the other big bus did the important trunk-service, the Number 10 to Stoke and Hanley. Today numbered 101 and running frequently as a prestige service it is the only First Group service that runs remotely close to Stafford and now also serves Newcastle-under-Lyne employing normally exclusively these fine Polish bodied Scanias. Indeed after a couple of years this initial batch from 2004 were moved on to other important trunk work and replaced by a new set of about eight buses. When I put up one of my Stafford buses and girls pictures last week it got a lot of hits so I thought I would treat you all to another one: And why not it is Christmas.
Posted by christopher at 15:11