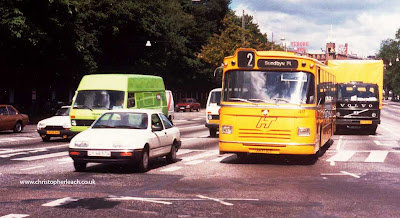 Memories of Copenhagen where I had a Danish Girlfriend come flooding back so it was well worth bringing this second division image to life for you with a little TLC. Indeed there's nothing I enjoy more than making something from nothing. The HT of those days is still a favourite operator of mine and these nicely rounded DAB Leyland buses had so much character like 1969 No.417, a lucky bus that outlived many of it's BL2d contemporaries receiving this yellow repaint in 1984. It is heading towards the Amager Bridge and on to the island of that name where the bus was garaged at Irlandsvej and carries the code Ir. I particular like these later examples of this bus which had an enlarged route-number-box making them that bit more memorable.
Posted by christopher at 07:49