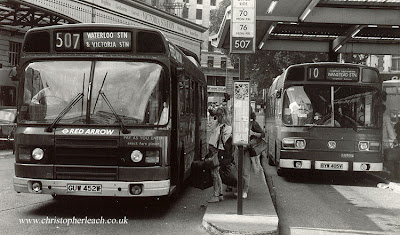 Until standee single-deckers were introduced on the new Red Arrow services in 1966 all the red buses seen working in Central London were double-deckers. Eventually the last of the 'Red Arrow' AEC Merlins were replaced by these Leyland National 2 buses but the far more numerous earlier National Mark.1 was pretty well confined to the suburbs like it's ancestor the Fifties AEC Regal RF. However one of these Outer-London routes coming right from within breathing distance of the city's greener fringes, the No. 10 from Wanstead in the North East actually penetrated in all the way to Victoria Station at the nub of the metropolis bringing with it earlier type Leyland National Mark.1 buses like LN 405.
Posted by christopher at 15:15

I'd just like to say again that I really appreciate your photo blog and look forward to the latest picture very day. Both your photographic style and your comments are refeshing and set your photos apart from that of other bus photographers.

I've laso looked at your art pages. Although I consider myself a fairly cultured and educated person, much of what the modern artists are doing these days passes me by completely and I don't even try to understand them any more. It's either far too trivial or far too complex and either way the message gets lost.

I must admit that some of your artwork goes beyond me too but a lot of it I find really appealing, especially the art-deco inspired work. Your line drawings remind me of James Ensor, only they are less grotesque and more subtle. Are you a fan of his?

Your kind comments are greatly appreciated and I'm pleased you enjoy both my blog and my art. Of course with the buses it is the photographs that are important but it is harder to do the text as it has to be informative and entertaining to a lot of diverse people. I make an effort to upload regularly but sometimes I have to skip a day or two and then do a bit extra to get a breather. You will be pleased to learn though that I have only just skimmed the surface of my vast collection, it's just a matter of scanning them all.

Yes I know James Ensor's work and like him as an Expressionist I use an element of shock and visual anarchy in my art. Like yourself I'm not a big fan of modern art as most of it is too clever for it's own good and has little to say for most of us. I'm a more traditional artist I draw what my imagination sees and what I feel. In a way I'm the same with my buses as I'm also an artist but for me it's all about childhood and links with my past. I don't have much family so my life has been punctuated with places I've been and what I saw.

Thanks for your message and please keep coming back.