Oh MAN! My current berlin Favourite on the Tetlow X10 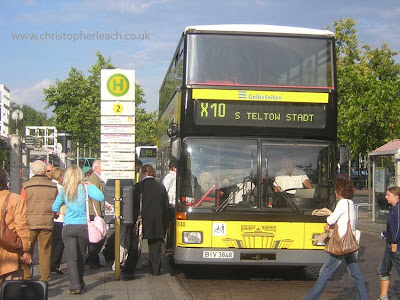 If I were to write up a list of my favourite buses most would now be crossed out having gone but one type remains still to be seen and enjoyed in decent numbers. With delivery commencing in 1984 the West Berlin BVG took about 460 of these Waggon-Union bodied MAN D 2566 double-deckers with numbers starting at 3500. Miraculously about 180 of these fine roomy spirited buses still remain in everyday service but sadly they should all be gone by the end of next year when BVG received it's second batch of 200 'jumbo-sized' Lion buses that make the whole double-deck fleet one of these worthy but not very interesting buses. Many of the former long bus routes from and to the Zoo Bahnhof Terminus have been cut back but the X10 to Tetlow affords a decent ride on some wide fast roads where unlike the new Lions that hum these old one's literally roar along like real big-hearted buses.
Posted by christopher at 03:38