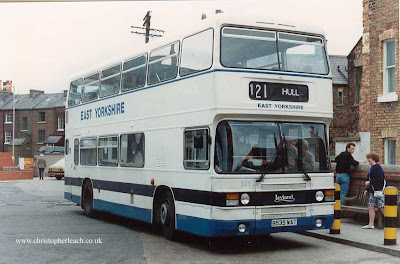 The National Bus Company with it's boring leaf green, poppy red and all white coaches was a pretty inflexible organisation but as denationalisation came into view an element of individuality became desirable once more. This mostly manifested itself on the dual-purpose and coach fleets but in some cases the simple additions made continued as part of the livery long after Privatisation became a reality including the style of letting. Maybe because historically East Yorkshire buses had been blue anyway it was one of the few operators chosen to carry this coloured relief and it was very attractive too seen against the clean white background. A coach seated Eastern Coachworks bodied Leyland Olympian was pictures in Scarborough at the start of the Nineties bound for the company's base at Hull.
Posted by christopher at 03:17