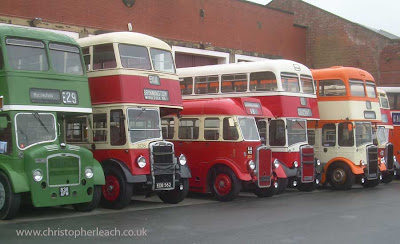 I've been rather busy over the last few days and my activities included a visit to the Manchester Museum of Transport in Boyle Street at the back of Queens Road Bus Garage where they were staging a Stockport Weekend featuring displays and former buses from that town as well as North Western of course whose headquarters were there at Charles Street along with a large garage. Old NW Bristols from the early-Fifties were very much in evidence as of course were Leylands of both operators. Former Stockport all-Leyland PD2 308 gave a perfect rattle-free ride despite being built in 1951. Stockport was the last major customer for the bigger similar half-cab Leyland Pd3 in 1969 and these East Lancs bodied buses with crash gearboxes entered service when the nearby much more adventurous Manchester was taking delivery of it's futuristic looking jumbo Atlantean and Fleetline 'Mancunian' OPO double-deckers. Indeed the PD3's also seen in this view were still in service when Stockport's new PTA owner Greater Manchester Transport was buying the new generation British Leyland London Bus the Leyland Titan at the end of the Eighties. Having said that the new Titans TN's didn't last much longer than their solid trustworthy elders and were quietly sold off as being none standard and as well as more Atlanteans, and similar Fleetlines the operator chose instead the cheaper Leyland Olympian and Metrobus as it's preferred future choice.
Posted by christopher at 09:32